Get Ready For The Big ‘Remonetisaton’ 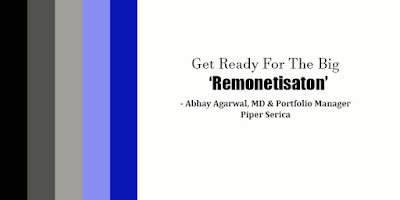 We are going to stick our neck out and say that with a steep drop in corporate tax rate from 34.9% to 25.6% (effective) in one fell swoop the government has undone almost all of the damage caused by the demonetization. Just as the negative impact of demonetization has been felt for a long time, the corporate tax rate cut will have long-lasting positive impact that will outweigh some of the short-term negative impacts.

Government has signaled to the world that it does not a follow a socialist ideology nor does it believe in central planning. It has forgone 1.45 lakh crore of tax revenue and instead put that money in the hands of big and small businessmen. The signal here is very clear that the government believes the private businesses are much better at capital allocation. The impact of this 1.45 lakh crore in the hands of private businesses will be bigger than it would have been with the government.

High tax paying companies will now have more capital to either re-invest or return to shareholders. Either way this will give a boost to the economy through a pick-up in private capex, generation of employment and increase in consumption. This is a virtuous cycle that has been missing in India for a long time. The potential increase in per-capita GDP over the next couple of years will get us over the inflection point where the country suddenly starts believing that it is not poor anymore.

The tax rate of 15% for new manufacturing companies makes us extremely competitive. Return on Capital Employed will increase and gestation periods for new projects will significantly reduce. India now has a great opportunity to attract international companies to set up factories in India.

Currency notes in India at Rs 21.71 lakh crore are 22% higher than pre-demonetization. A large part of this is still ‘black-money’. While not a cheap option, we can argue that the lower tax rate, especially 15% for new companies, will act as an inducement for a large part of this to be converted in ‘white-money’. This may be an unintended consequence, but it will help fill some of the gap in government tax revenues. Once this theme starts playing out, suddenly a lot of cash sitting in vaults will become a productive asset. Also, a large part of it will find its way into the banking system and capital markets. This flow has the potential to take the stock markets to new highs.

Most of our portfolio companies were paying more than 30% tax. They will now have more net income to either reinvest in growth or to pay-out to shareholders. We continue to remain very positive on our portfolio and will continue hold very little cash in the portfolio.

The writer of this blog is Abhay Agarwal MD & Portfolio Manager, Piper Serica. Piper Serica is a SEBI registered provider of Portfolio Management Services (PMS). It has generated industry beating returns. The objective of the PMS is to grow wealth over a long period of time by investing in LEADERS in sectors that COMPOUND earnings for a very long period of time with very little business volatility. To learn more get in touch with him at abhay@piperserica.com or visit www.piperserica.com
at September 23, 2019 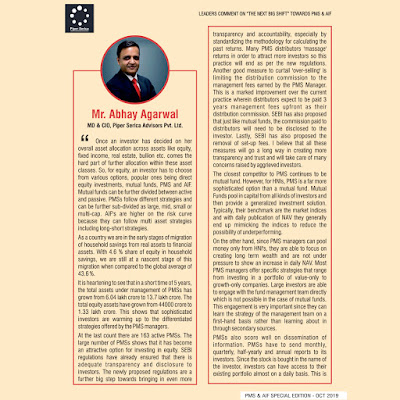